This filling and satisfying soup is truly one of my favorites. The now tattered and stained recipe is a clipping from a Sunday newspaper that I stumbled upon over 20 years ago. It originally appealed to me simply because it was built from pantry items; all of which I happened to have on hand.

However, it only took trying it once to know that it would be making regular appearances on our table. Though I have altered and modified the recipe to accommodate our own preferences, it remains one of the tastiest and easiest one-pot meals in my recipe box.

More stew than soup, it is hearty and filling with smoky warmth from cumin and cinnamon and plenty of chew from lentils and barley. A traditional and generous base of onions, carrots and celery add not only foundational flavor, but a solid helping of veggies in each bowl. This high fiber, high protein dish satisfies even the most committed carnivores (ie my husband). In fact, this is one of the few vegetarian dishes I make that my husband greets warmly and without asking “what else is for dinner?”

Lentils have an amazing nutritional profile – a mere half cup of cooked lentils offers 12 grams of protein and almost 10 grams of fiber. Both of these give lentils staying power (referred to as “satiety”) and make them an excellent vegetarian protein source. Barley offers an additional fiber source and is particularly rich in the dietary fiber called beta-glucans, which can help lower cholesterol and blood sugar.

Try this lentil stew during the dark days of winter when you are craving something filling, nourishing and most of all…delicious! It does not disappoint. 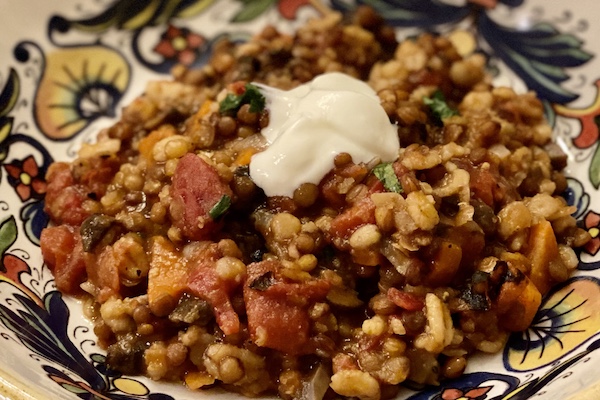